This activity shows a reference age and a specific game. Your job is to take the procedure as an example and adapt it to the target you work with and the discipline you teach.

The activity proposed today is suitable for primary school classes and it can encourage pupils to learn actively. In this specific case we propose an activity for the practice of mathematical calculation.

The game is called the Mathematical Flag and follows the same rules as the classic flag steal.

It divides the class into two teams. Each team must be in line at a distance of at least 5 meters from each other.

Halfway between the teams, the teacher keeps a handkerchief (flag) suspended, which must be stolen as quickly as possible by the children involved in the play.

How to call children to play? 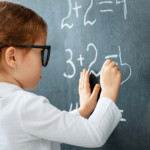 How to create a Situation – Problem.2 Trainers, facilitators, teachers

I IMAGINE YOU – understanding through images2 Trainers, facilitators, teachers