Training – Addressing the Causes of Brexit: Embracing the Self

Training – Addressing the Causes of Brexit

Starting 14th of January, a member of l’Orma participated in a training course which took place near Gloucester, United Kingdom. The subject of the 8 day training was addressing the causes of Brexit and all activities were held at a beautiful Asha centre. There were 4 participants coming from 7 countries which included Turkey, Greece, Lithuania, Slovenia, Bulgaria, UK and Italy.

The aim of the course was to gain a better understanding of underlying causes of Brexit, to trace the extent to which Brexit highlights inner, personal, emotional, psychological, spiritual issues in our world and to understand ourselves better. Training approached the topic through personal aspects and related it to embracing self. During workshops group discussed the relationship between Brexit and self development by identifying causes as cognitive, structural – related to economical, political systems or incidental. In the end group found out that most of the reasons behind voting for Brexit were cognitive, thus, based on people’s feelings, emotions and the way they perceive the world. Such findings also stated the relation and importance of raising self awareness.

Workshops also included theory and practice of communication and how to have a constructive conversation about politics. Group had an opportunity to realize the importance of creating a safe space for the other speaker to disagree with expressed opinions, also showing that your feelings are distinct about their beliefs. This way, fostering compassionate engagement and empathic conversation allows us to build bridges with people who we might be estranged due to different opinions. Even though the group analysed conversations of political topics, such a model of communication practice could be applied to other sensitive topics too. Furthermore, the group studied aspects of effective storytelling. According to Aristotle’s triangle of influence, facts, statistics, authority and credibility of the speaker has not as much influence as evoking emotions of the audience.

In addition, training comprised of other workshops that also aimed to encourage people to take action at the individual and personal level, to activate more of the inner potential, become better versions of ourselves, to feel the joy of self-knowledge. Group participated in a mindfulness workshop, practised meditations and learned to be more self aware by exploring emotions, thoughts and body sensations. Training course included many activities and group games as a tool to learn and discover. It allowed to observe and see how different energies influence human behaviour and contribute to community. Group also discussed ways of maintaining a positive energy and balanced state of mind.

Every day of the training included some reflection time during which group shared their thoughts and insights, discussed things learned, which contributed to connecting with other participants, understanding ourselves better and how can we relate to others and the world, affirming what has been learned. The outcomes were always encouraged to be presented and expressed in artistic ways which also helped to discover new things about themselves and each other.

LEARN MORE ABOUT L’ORMA AND HOW WE CAN COLLABORATE! 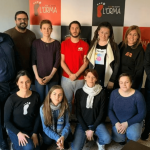 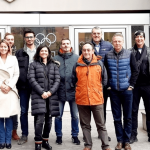